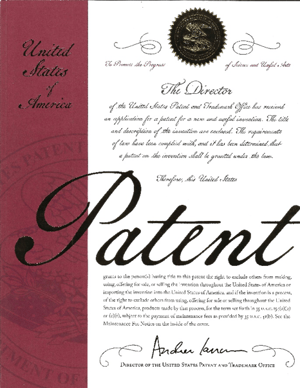 Exactly four and half years after SNI got its start, our first patent was issued by USPTO for an ASSET-CONDITION MONITORING SYSTEM representing the core idea behind the company’s original vision.

An ultrasound sensing system for monitoring the condition or integrity of a structure, comprising at least one digital sensor interface (DSI) being mounted permanently or semi-permanently to said structure to which at least a portion of said sensors are  connected, said DSI being configured to transmit said first electrical signal and receive said second electrical signal, and to generate an A-scan signal based on said first and second electrical signals for each sensor, said DSI being configured to calculate thickness data based on said A-scan signal and having circuitry for transmitting a digital signal comprising at least said thickness data and an address corresponding to said at least one DSI.

For a full copy of the patent, in pdf format, please contact us:  customercare@sensornetworksinc.com

Sensor Networks, Inc. has identified a problem in today’s world: when it comes to complex asset integrity, there are obstacles and challenges that you will face along the way. Where there are problems, innovative solutions should be created to fix them. With that basic mission in mind, Sensor Networks, Inc. was born.